Your mobile number is not registered with us. Please register your mobile no.

Attracted by the beautiful weather and landscape of the city, a lot of tourists from around the world come to Dharamsala. It is also a favorite weekend destination for people residing in nearby cities like Shimla, Delhi, Chandigarh and Pathankot.

Owing to the rich history, the city also gets visits from history students and people interested in the past. The Dalai Lama had come to India after being exiled from Tibet along with his followers and settled at the Upper Dharamsala. The followers of The Dalai Lama visit his exile home every year. Many tourists come to Dharamsala only to celebrate the Buddhist festival and fair held here. 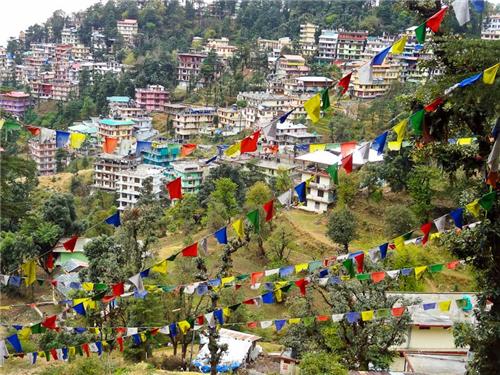 Trekking is another attraction for tourists visiting Dharamsala. In fact, trekking has its own charm in the city. The paths that are followed by the regular trekking expeditions are less difficult but provide the thrill of walking through wilderness of nature. Dharamsala also provides walk past the mountain to the valley on the other side.

Culturally Dharamsala is a very rich city. It does not only provide feast for eyes with its scenic beauty but also gives ample scope to visit the Art Galleries and Museums. Hence Dharamsala has become a city that contributes to economy and commerce of the state through its tourism industry.

The following tourist attractions are major spots at Dharamsala.

Masrur (or Masroor): Masrur is famous for its rock temples which are fifteen in number. These rock temples date back to the 8th century. It is also a major attraction of Dharamsala since the rock carvings are similar to Kailash temple at Ellora. This place is 15 kilometers outside the city. The main temple of Masrur has the images of Lord Ram, Goddess Sita, Goddess Lakshmi.

Bhagsunag Temple: This is a temple of god Shiva. It is situated around 2 km from McLeodGanj Bazaar. The temple bears a rich history and was constructed in 1800. The temple was then worshiped majorly by 14 Gukha platoon villages in Dharamshala.

KunalPathri Temple: This temple is very close to Kotwali Bazaar at Lower Dharamsala. The temple has been dedicated to goddess Kalpeshwari. There is a good mythological story behind the construction of the temple. People believe in the sanctity of the goddess and come to pray here. 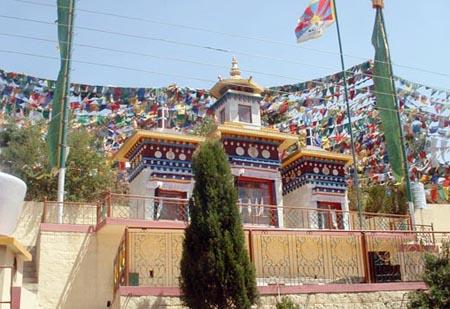 Chamunda Temple: This temple is around 15 km from Dharamshala. It is situated on the right bank of river Baner and falls on the Mandi-Pathankot highway. The attraction of this temple is again associated with mythological story related to Goddess Kali.

Jama Masjid Dharamshala: This mosque is built in 1719 and holds the key to many pages of history. Like any other Jama masjid in India and other countries, the Muslims come here to pray on Fridays. It is situated opposite to the Dhauladhar Hotel in Dharamsala.

Museums and Galleries at Dharamsala


Naam Art Gallery -Sidhbari Dharamsala: It is a feather added to the already rich and vivacious culture of Dharamsala. It exhibits paintings by Elizabeth Buschmann. The artists is renowned for her paintings in water colors and acrylics. Some of the oil paintings by Alfred W. Hallett has also been put up in this gallery. Elizabeth Buschmann hails from Germany and has learned painting in London and Paris. The city of Dharamsala is proud to put up the paintings by her apart from the exhibitions put up in USA, Germany, Scotland and Switzerland. Apart from Dharamsala she has been helding exhibitions in New Delhi and Mumbai.


Dal Lake: One of the most beautiful spots in Dharamsala is the Dall Lake. The banks of this lake are bounded by Deodar trees and rhododendron flowers during spring seasons. The lake is situated about 2 kilometers from McLeod Ganj Bazaar and is easily accessible to tourists. The lake gets maximum tourists during the Dall Lake fair.

Triund: Triund is about 17 kilometers from McLeod Ganj. Triund is accessible by trekkers only since there are no roads to that place. The trekkers can halt at Triund in hoods, caves and night-stays of the gaddi villagers.

Naddi: Naddi is a scenic spot that has turned into a picnic spot in Dharamsala. It is situated about 5 kilometers north of McLeod Ganj. Naddi is also a popular destination for trekking parties since Kareri Lake, Triund and Guna Devi treks are arranged from here. The view spot itself provides breathtaking views of the Kangra Valley. 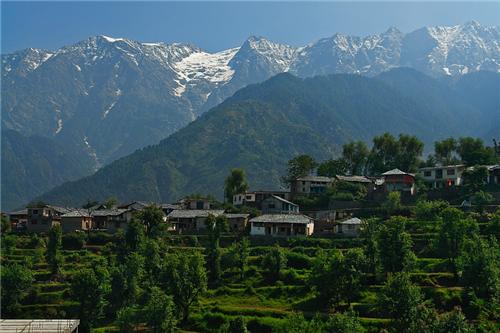 Bhagsu Waterfall: Bhagsu Waterfall is situated just beside the Bhagsunag Temple. It is a lovely cascade during the monsoon season and falls 30 feet. The water fall is about 2 kilometers from McLeod Ganj.

Since the city commands such a huge number of tourists, it also provides various kinds of accommodations. There are star rated hotels, budget hotels, inns and home stays for those who pay a visit to the land.

Tourists will find various accommodation facilities that provide western standards of hotels as well as friendly home stays. The stay depends upon the budget. During tourist seasons the rate of rooms in these accommodations are slightly higher than the of-seasons.