Museums and Galleries at Dharamsala

Museums and Galleries have a special place in a particular city. They exhibit the nature of people living in the urban, the interest they share and the concern to keep their culture intact. Each place has its own characteristic and distinguishing qualities that are reflected in its culture. The history of the place contributes a lot to the exhibitions and museums present at a place enhancing the diversity within the exhibits.

Dharamsala has a rich culture and a very prosperous history that lets it have its own collection of artifacts in the museums and art galleries. The blend of culture between the Gurkhas and the Tibetans has provided more features to the already vivacious ethnicity in the city. Furthermore it has also witnessed wars and settlements of many groups on its land. This factor has also contributed in setting up separate gallery for the heroes of the past.

The Tibet Museum in Dharamsala

Dharamsala is known for the settlement of the exiles from Tibet who followed His Holiness The Dalai Lama and came to India. The Tibet Museum is situated in upper Dharamsala or McLeod Ganj. It is the official museum of the Central Tibetan Administration’s Department of Information and International Relations. The Museum is aptly located at McLeod Ganj which is a seat to most Tibetan exiles in India. It is near the main temple of The Dalai Lama, Tsuglah Khang.

The Tibet museum has been inaugurated to spread the knowledge of Tibetan history and culture. It also aims at spreading the news of the ongoing abuses that China has committed against them. The 30, 00 photographs present in the gallery tell the story of the journey of Tibetan exiles into the land of Himalayas.

The Tibet Museum presents the history of Tibet and visions for its future through texts, photographs, videos and installations. The Tibet Museum was inaugurated by the 14th Dalai Lama on 30th April, 2000 in the presence of almost 300 dignitaries and volunteers. It preserves all documents that are related to the Tibetan movement and history. They educate people through various photographs, sculptures and research documents in the museum.

The gallery is situated in Kotwaali Bazaar in Dharamsala. It was inaugurated in 1990 to open a forum of collection of artifacts, costumes, jewelry and other valuable relics from history. The museum has been proud to possess relics that date back to the 5th Century A.D. Various things and coins that the people of the past used are in display at this museum. Common people can visit and witness the kind of things that were in vogue in past. Sculptures, pottery items, coins, manuscripts, and tents for Royal families are some of the things that can be seen in this gallery. 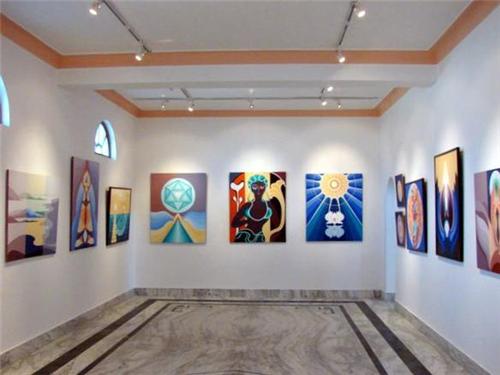 The Kangra Art Gallery does not only have a section for relics and sculptures, but also provides the scope to witness the exclusive library. This library is within the Museum and is a separate section to display contemporary arts, sculptures and paintings. This is a place where the famous Kangra Kalam work is preserved. It is the famous miniature painting that uses seductive figures and fine colors, but is not practiced anymore. The state Himachal Pradesh is proud of these miniature paintings since it is a pictorial representation of the culture of the state. The colors that are used in these paintings are natural colors and are extracted from flowers and other herbs. These paintings also depict royal families, their courts, rulers, religious inclination and thus showcase a lot of history within itself. The Gallery is open from Tuesday to Sunday. Monday is weekly holiday.

Art galleries also showcase the interest of people in a particular area towards a field of arts. NAAM Art Gallery in Dharamsala is an example of the love for paintings within the people residing in the city. It mostly exhibits paintings. That is by Elsbeth Buschmann. Her watercolor and acrylic paintings are famous all over the world. The Art Gallery has also put up exhibition of oil paintings. This was by Alfred W. Hallett.

Elsbeth Buschmann is a painter originating in Germany. Her professional career has taken her to different continents which include USA, Scotland, Switzerland and India. Her paintings are also on exhibition in Mumbai and New Delhi in India. Dharamsala, being in love with paintings have also organized the show. The gallery remains open from 10 am to 7 pm on all days of the week except Mondays.

The War Memorial at Dharamsala 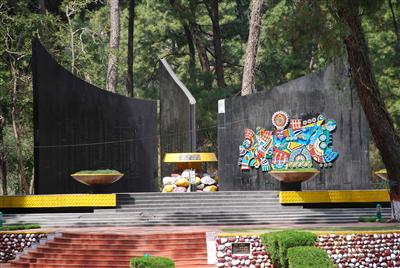 Situated at the entrance of the city of Dharamsala, the War Memorial serves as a tribute to the heroes of past who laid their lives for the sake of the country. The Memorial has been beautifully situated within the deodar forest at the entrance of Dharamsala. The black marbles which are founded in the names of the heroes have their names inscribed on it. They also mention the dates of their lives. These heroes have been instrumental in the operations of 1947-48, 1962, 1965 and 1971 and have sacrificed their lives safeguarding India. The War Memorial is a token of respect and pride that the motherland feels for its brave soldiers.