Dharamsala in One Day

Dharamsala has been famous for a number of reasons throughout the world and has attracted more tourists in recent years. Lying in the spur of the Dhauladhar range of Himalayas, the city not only offers beautiful scenic views but also adventure sports, yoga, trekking and religious relief. A trip to Dharamsala may take several days based on the interest of the tourists. However, when it comes to take a trip of the city in one day a strict itinerary should be followed.

Enjoying the beauty of the place as a whole is recommended for tourists who intend to experience Dharamsala in one day. It is always better to start early on the day scheduled for the trip. The tourist must reach Dharamsala by the last evening or night so that the trip may commence just after early breakfast. To roam around in Dharamsala all tourists must choose from two kinds of transportation – four-wheeler or two-wheeler. 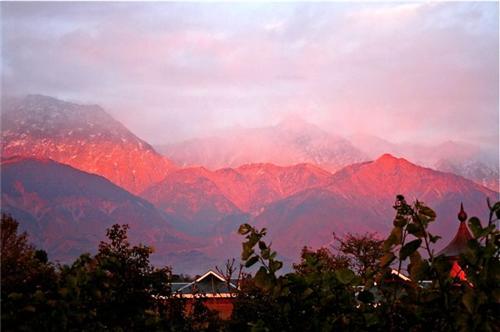 The two wheelers are available for hire all around ranging from 500 to 1000 rupees depending on the type of bike. The public transports like autos are also readily available but due to the traffic are not very convenient to move around.

Dharamshala is mainly divided into three parts upper part called McLeod Ganj(British and Tibetan site), the middle Kotwali bazaar and the Lower Dharamshala or Kaccheri area (commercial site). Further besides the distinct points, lower Dharamshala is the Abode of Indians, while the upper one is that of the Tibetans.

First Half of the Day at Dharamsala

A definite and early visit should be the War Memorial Garden at about 0900h. This is situated well before the main bus stand near Dharamshala College. This is a very bright and colorful building with a neatly built red and white brick wall as the boundary. The garden is dedicated to all those brave men who have sacrificed their lives while defending the mother land. The walls of the memorial garden have the names of the brave martyr’s all over them as a sign of respect towards them.

About 1 km from the memorial is the international cricket stadium which should also be on the visit list. Unlike any of the other grounds around the country this stadium has a unique architecture that immediately catches the eye. The view of the terrain around the stadium and the greenery makes it an excellent picture spot. By virtue of its setting in nature, it is beyond doubt the most attractive cricket stadium in India. An additional feature is the nearby scenic Dharamshala College covered in Pine trees lined together on one side. All three sites can easily be covered by 1100h. 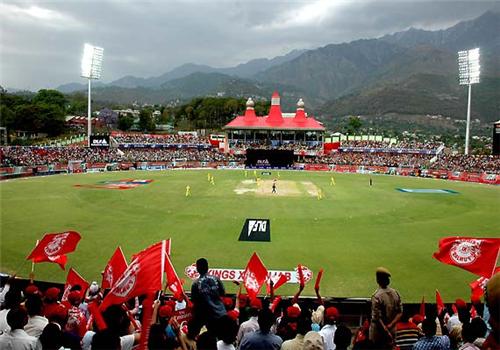 The next destination should be the Tsuglagkhang Temple (The Dalai Lama’s Temple). The Temple is about 7 Km from the stadium and will take about 30 minutes to reach. It is in Upper Dharamshala or McLeod Ganj where this temple is situated. It is here that the teachings of His Holiness the Dalai Lama take place every year. The temple has a number of rotating prayer wheels. A prayer wheel is a cylinder which has thousands of prayers written in papers inside them. The rotation of these wheels signifies a prayer being enchanted.

The visit to the temple will culminate around 1330 hours which makes one feel the pinch of hunger.

The visit to the Tsuglagkhang Temple must be followed by a lunch break in one of the cafes in the vicinity at about 1330h. After two hours in the monastery these cafes have a huge variety of delicacies to choose from. The Thupka also called the thuppais a definite order. The locals and tourist all approve of this special local dish which is kind of a thick soup with noodles and Momos added to it.

Second Half of the Day at Dharamsala

After a quick lunch at about 1430h the next destination should be the Bhagsu Nag Temple. The temple is dedicated to Lord Shiva and is 8 km from the Tsuglagkhang Temple. The travel time between the two sites is 45 minutes. One can reach Bhagsu Nag at about 1515 hrs. A fresh water spring, in which pilgrims take a Holy dip flows through the temple. According to the legend, 5000 years ago, Nagdevta, the snake God was drawn into a battle with the local king Bhagsu who challenged to steal water from the sacred Nag Dallake. King Bhagsu was bested and forgiven by the Snake God and the site was consecrated as Bhagsu Nag. 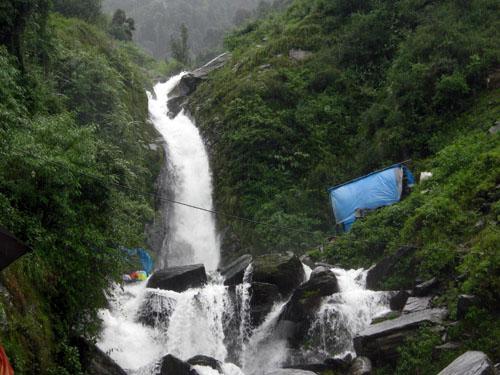 About one Km from the Temple and at a walk able distance is the beautiful Bhagsu waterfall. The waterfall is a must visit especially during the rainy seasons when the fall has ample water for both scenic beauty and enjoyment.

By about 1700h both the temple and waterfall visit can be completed.

As into the early evening the penultimate site to be visited is The St. John’s Church in the Wilderness. It is 6 Km from the waterfalls. The tourist can drop at Dal Lake while travelling to the destination since it falls on the way. It is an Anglican church located in a forest. The neo-Gothic structure of the church was constructed in 1852.

By 1800 the visit to the church can be comfortably completed and one can move to the next spot.

The final destination of the trip has to be the Bazaar where one comes across all kinds of people. Plan to reach the bazaar by 1830h and spend two hours there.

The best way to describe it would be a collection of people from different cultures and of all ages. This crowd is a mixture of Indians, foreigners and Tibetans. The market is an excellent place for souvenirs, some Tibetan jewelry, cutlery, clothing and artifacts. A ginger tea on the roadside is sure to re-energize individuals during the hunt for the best deals.

To end the day it is ideal to have a dinner of the incredibly delicious Tibetan food by 2030h. In some ways it is similar to both Chinese and South-East Asian food. The Momos are a specialty and are very cheap.